My kids love it, and so do I, when I find a new game to play. I mean, come on, you can only play CandyLand so many times.  So, I am happy today to bring you two games from Blue and Orange Games, Gigamons and Top That! 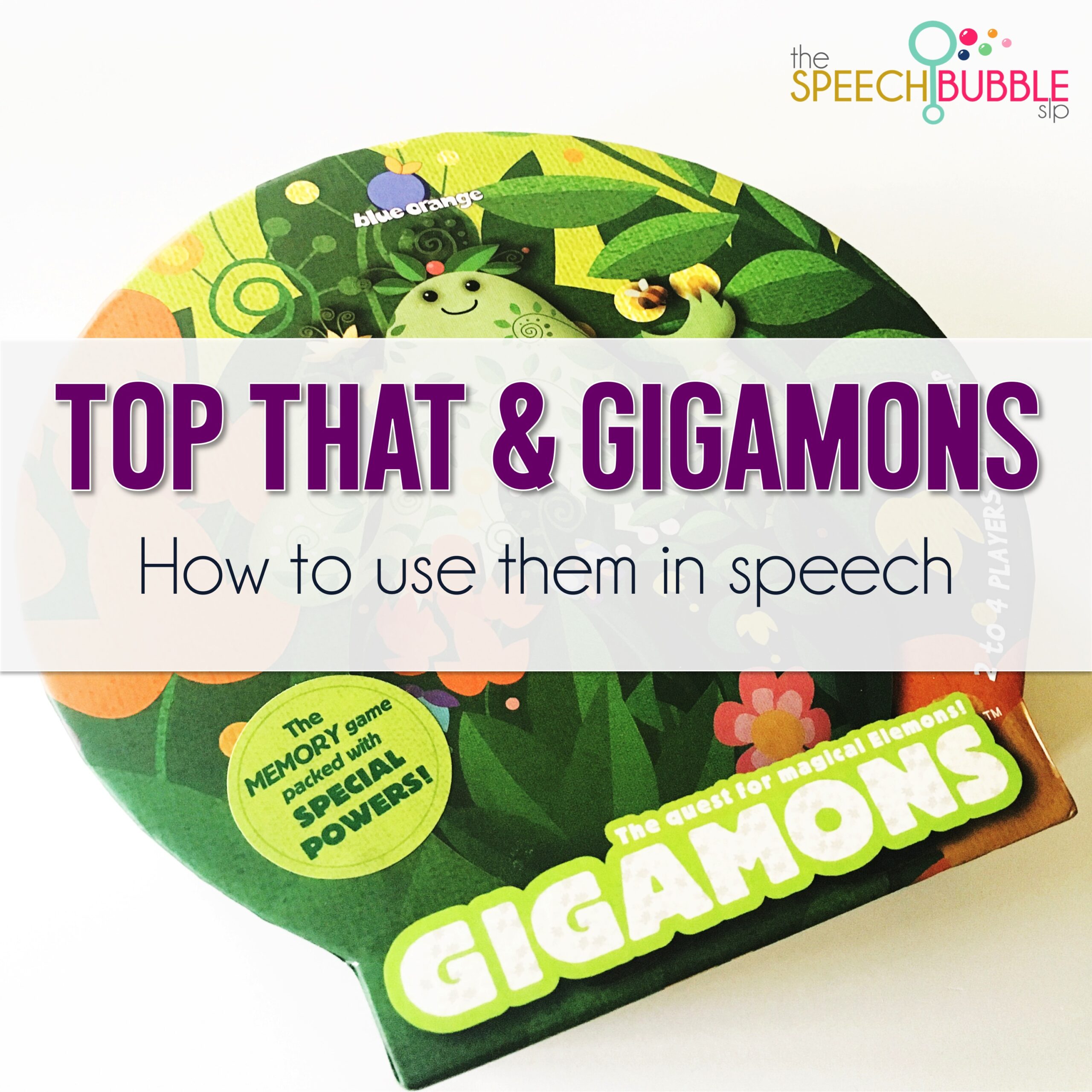 First up, Gigamons. It’s a great game if your kids are especially into Pokemon.  The apprentices, aka the players, must summon a Gigamon to be allowed into the Wizard’s Guild. The player who summons the most Gigamons wins! This game is for kiddos ages 6 and up, so about Kindergarten.  It is kind of like a matching game. 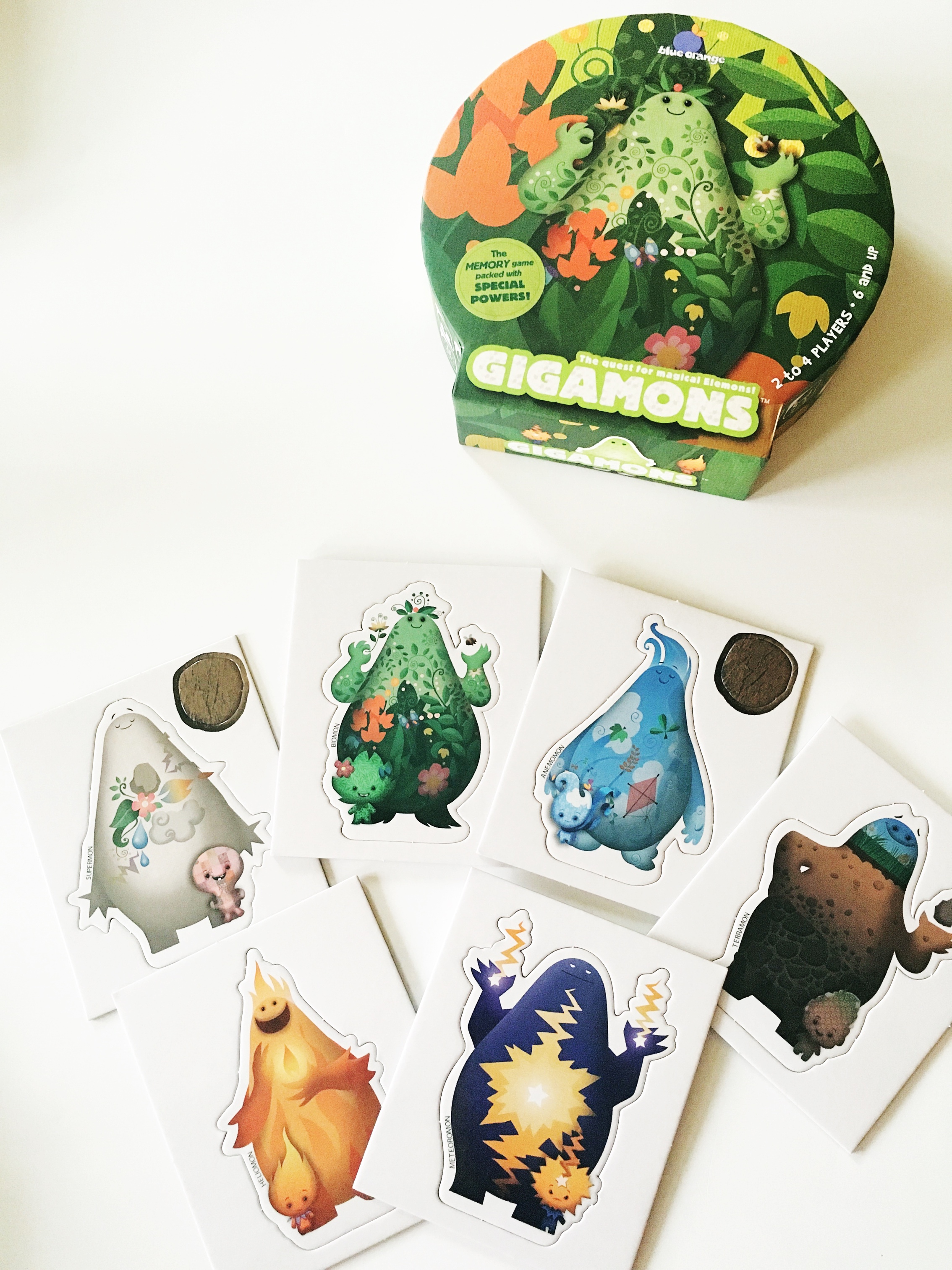 You place the tiles face down in a 3×3 square and the kids take turns flipping over two tiles. The tiles have cute little characters called Elemons on them. If they match, the player may take the two tiles and replace them with others from the pile.  If they don’t match, they flip them back over. 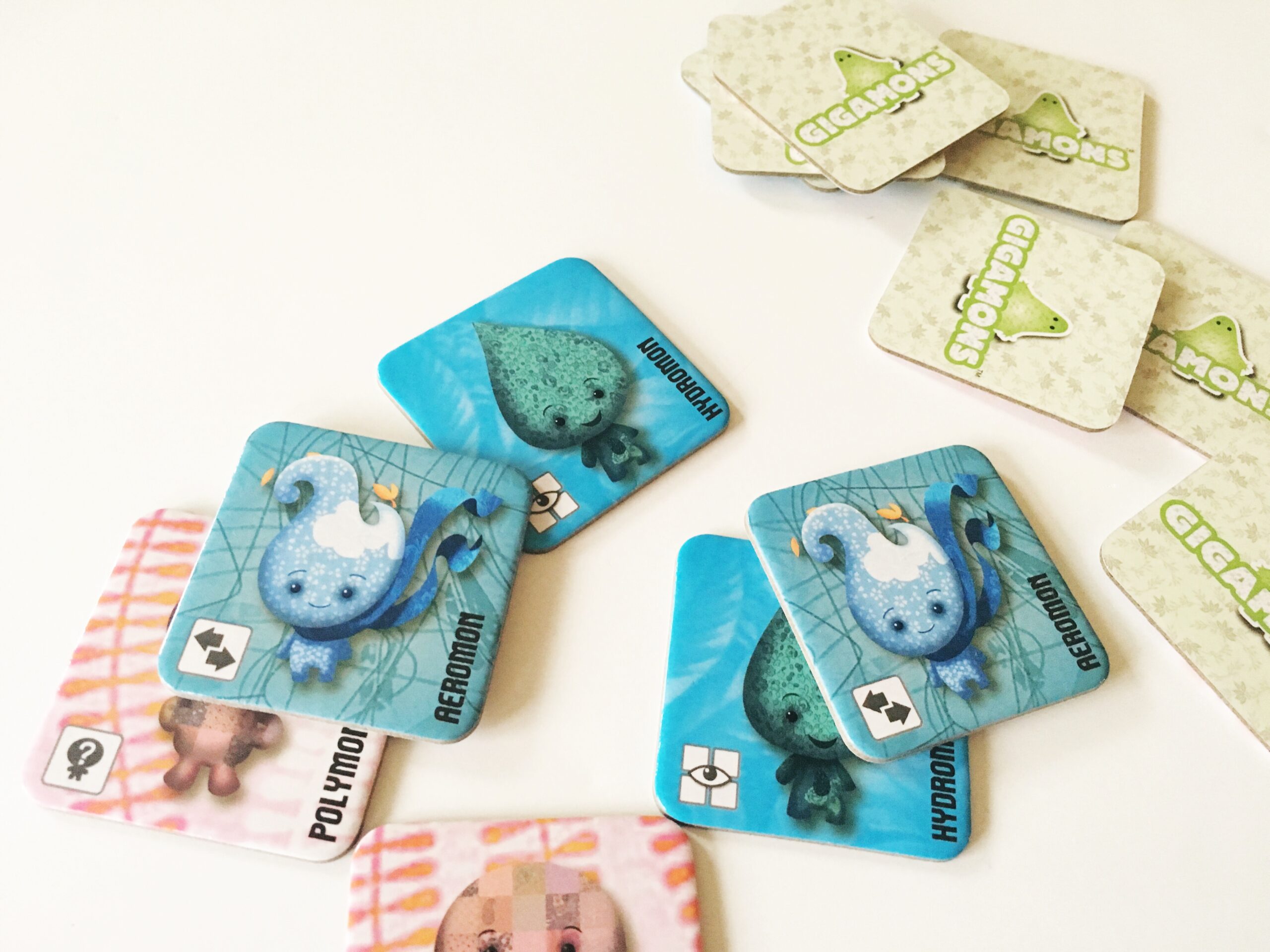 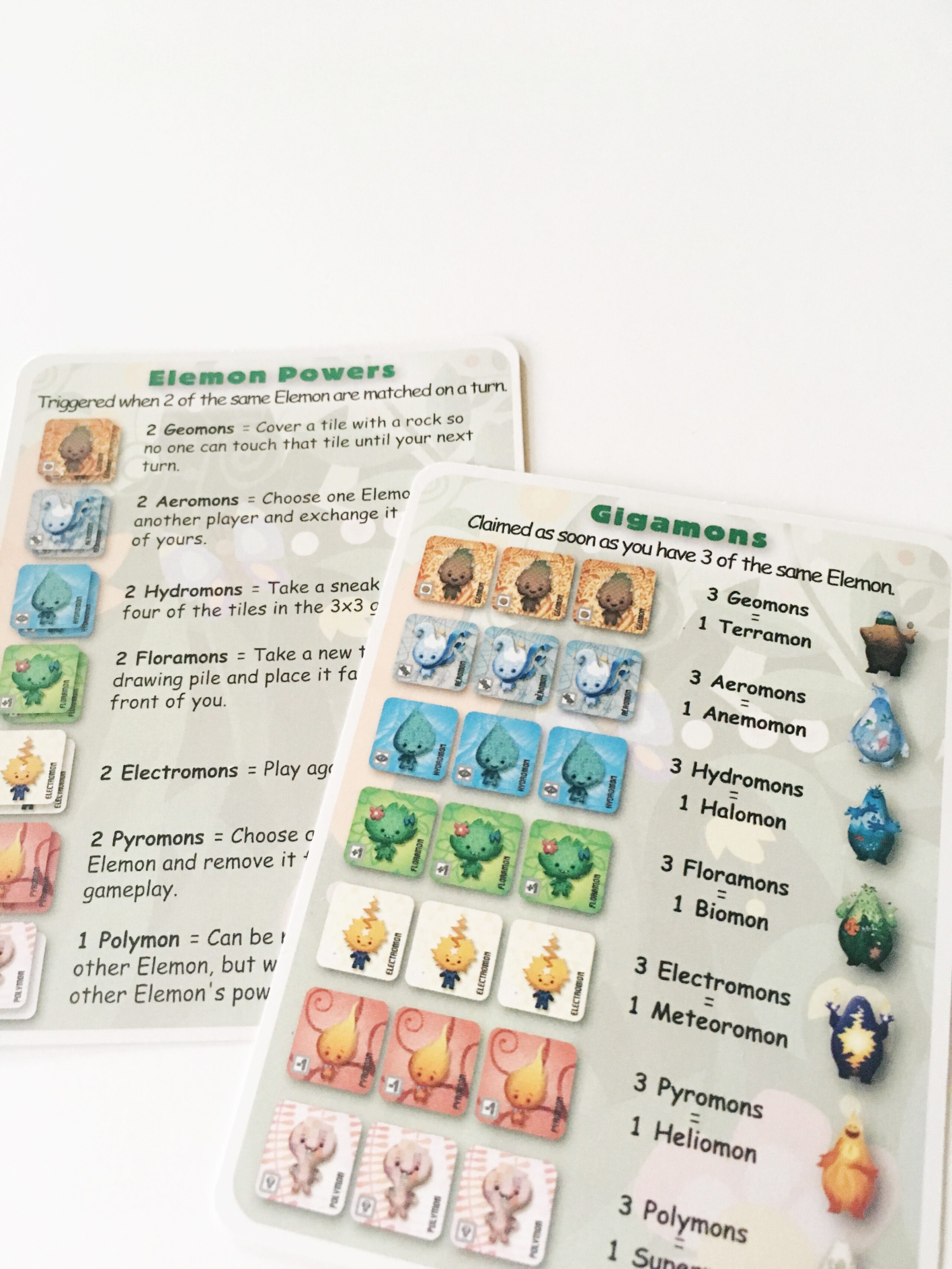 Once they get three of the same Elemon, they make the corresponding Gigamon.  If a different player has the Gigamon already, they can steal it too! Once they have summoned 3 Gigamons they win.

What can you target with this game?

Next up, Top That.  This game is just too cute! It is for players 6 and up, but I would play this game with my 1st graders or 2 graders, not Kindergarteners. 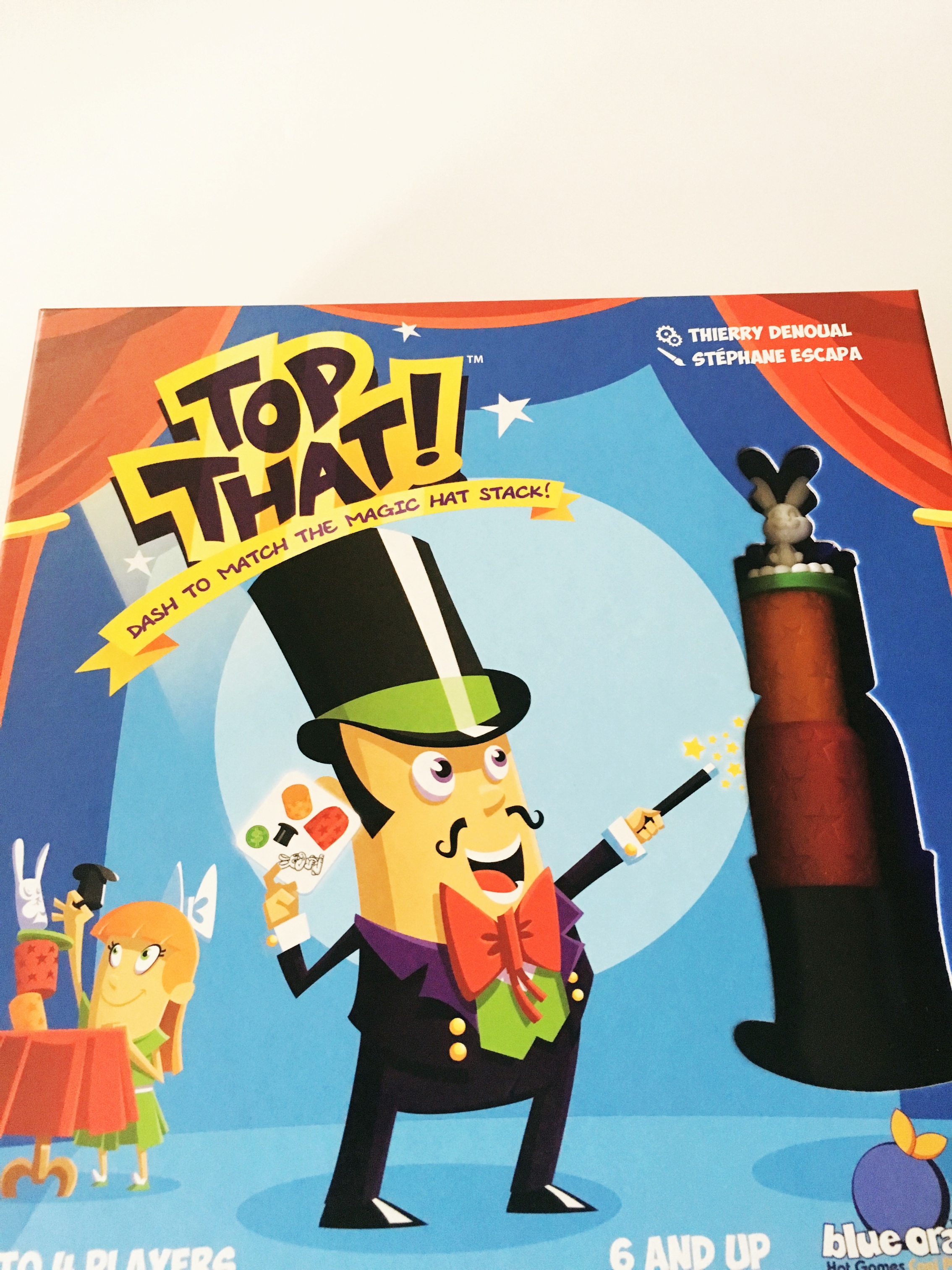 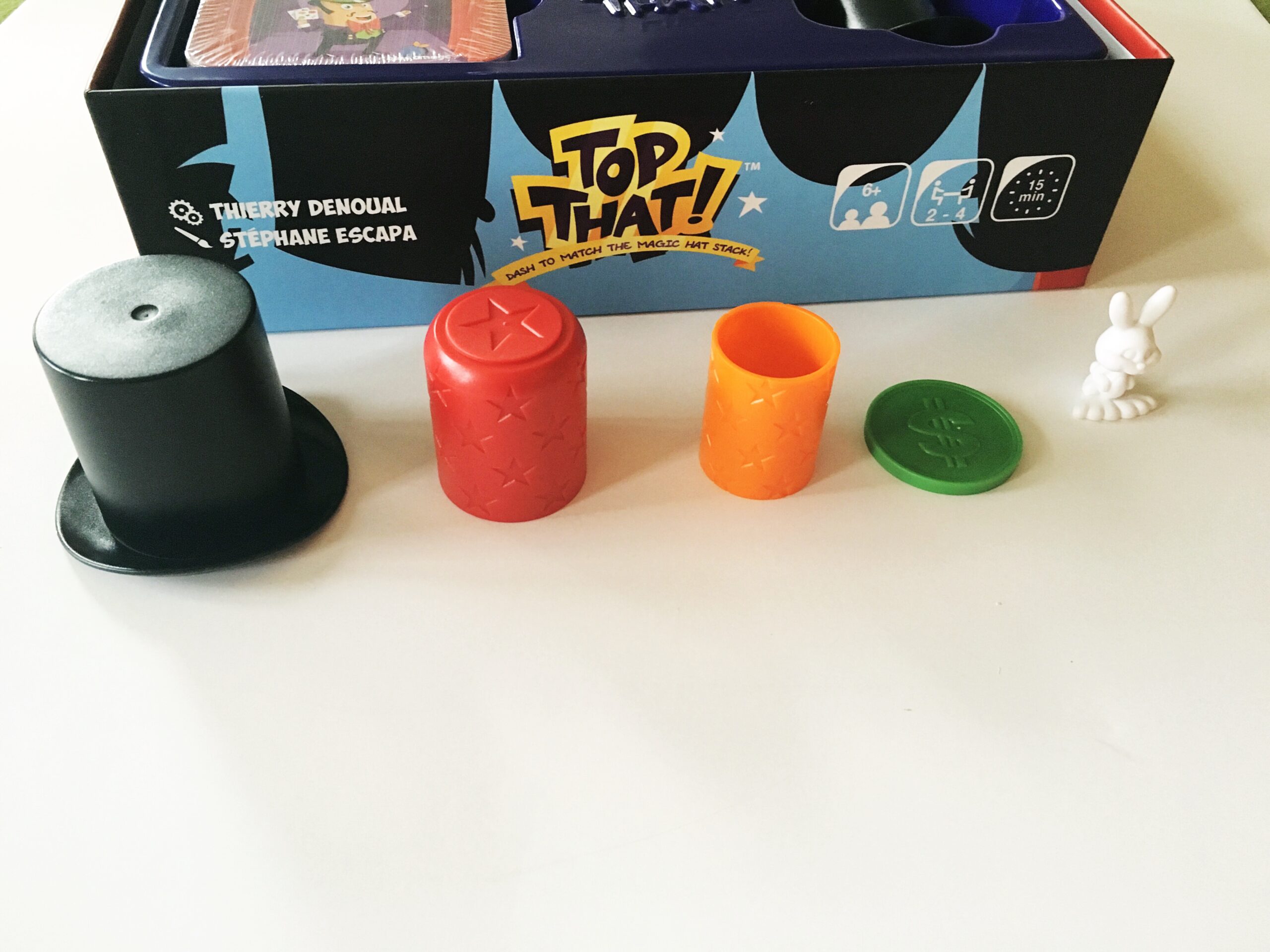 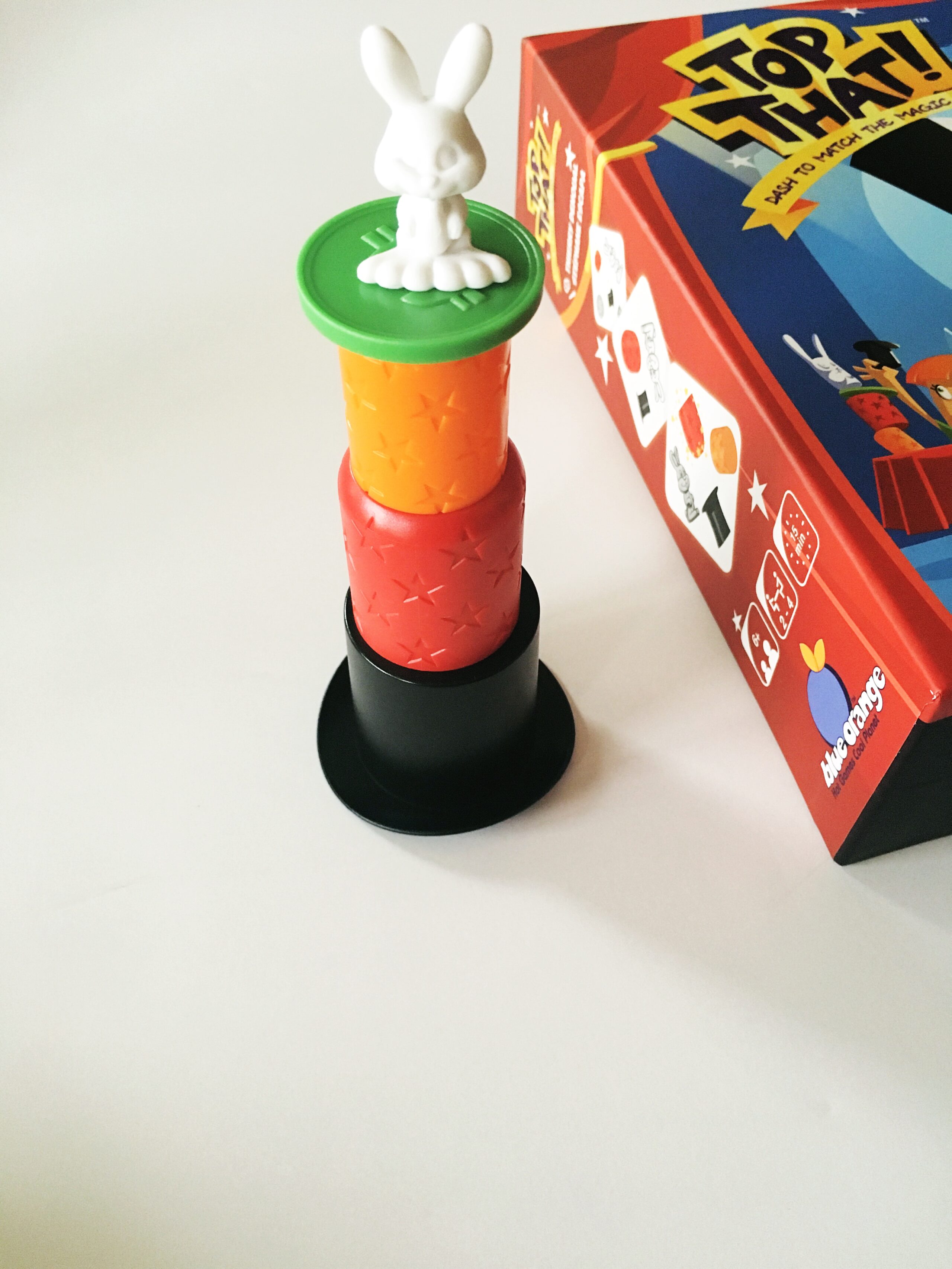 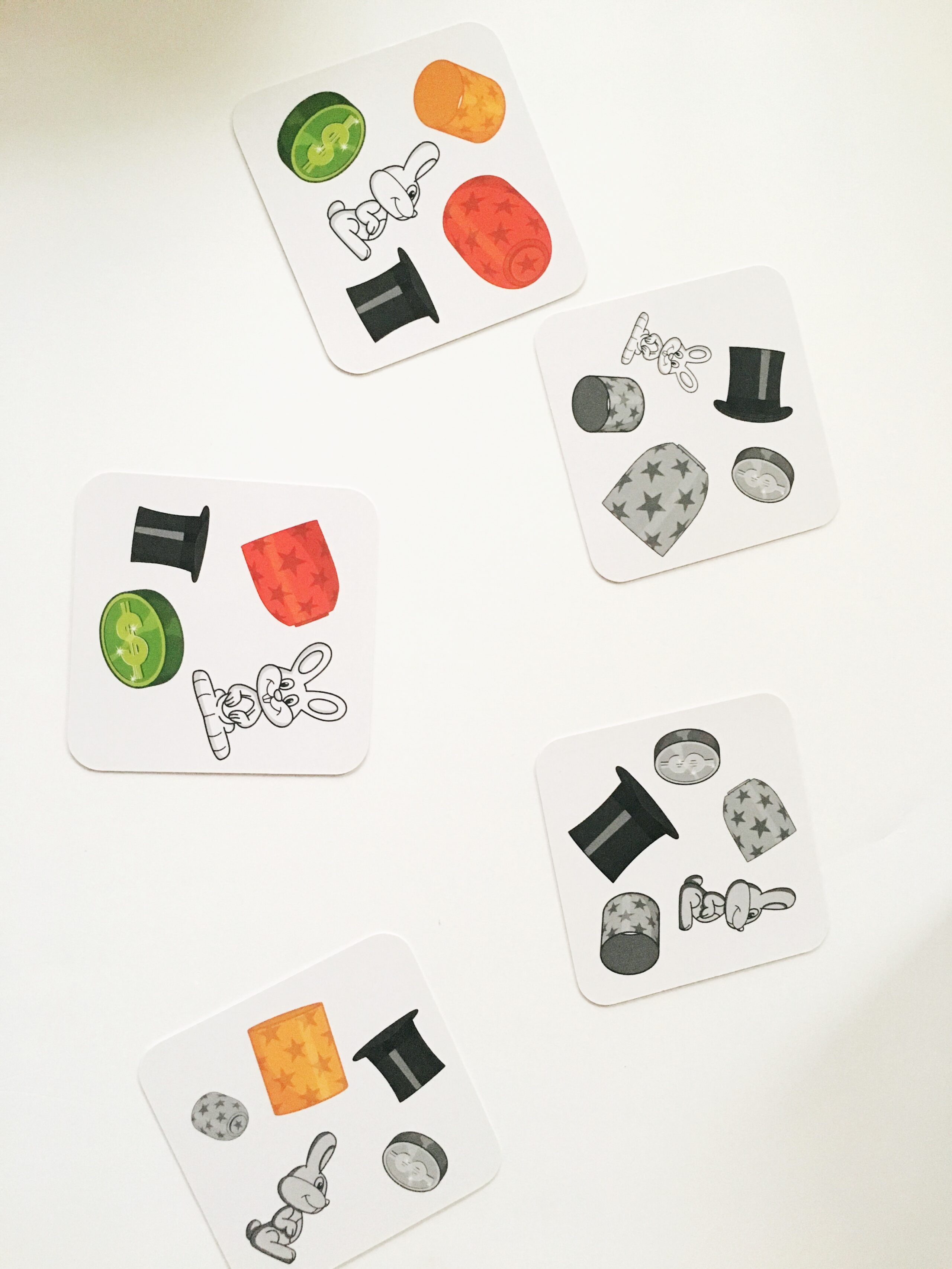 First one to make their stack yells out ‘Top That’.  If they made the stack correctly they keep the card as a point. If not, then the other players keep going until someone has it.  The winner is the player with the most cards.

What can you target with this game?

You can learn more about these games and watch some short videos at Blue Orange Games.

This is so cool! ... See MoreSee Less

When this happens, it's usually because the owner only shared it with a small group of people, changed who can see it or it's been deleted.
View on Facebook
· Share

Have tape, will travel! With just some tape and toy cars you have a blast working on basic concepts and following directions!bit.ly/2owhEw0 ... See MoreSee Less

Basic Concepts on the Road - The Speech Bubble

Today I wanted to share a fun and easy way to work on following directions and basic concepts. I have a few friends who are targeting these goals in speech so I need to make sure I keep the activities...
View on Facebook
· Share

What a great idea to support vocabulary in the classroomSO SMART! 🤯 ... See MoreSee Less

Fluency can be one of the toughest areas to target in the schools, especially when you get asked to screen a student for fluency! Gathering materials to inspire language samples can take up time that I don't have. So I use this Stuttering Screener instead to get all the information I need.bit.ly/2owmhGa ... See MoreSee Less

One of the toughest parts of working with new fluency students is determining the best starting point. Enter, The Stuttering Screener!
View on Facebook
· Share

Push-in therapy have you stumped? Here is an idea you can try to when you want to target articulation in the classroom. bit.ly/2o8NYsy ... See MoreSee Less

An Idea for Push-In Artic Therapy - The Speech Bubble

We keep hearing about how the Push-In model for delivering speech therapy and it’s becoming more and more popular. I use this model for some of my language students and it can be pretty fun. Today I...
View on Facebook
· Share