While at ASHA, I saw something that caught my eye. Complete Speech was showing off their new app Vowel Viz.  I had never seen anything like it and had to know more!  This app provides REAL-TIME visual feedback of vowel productions! 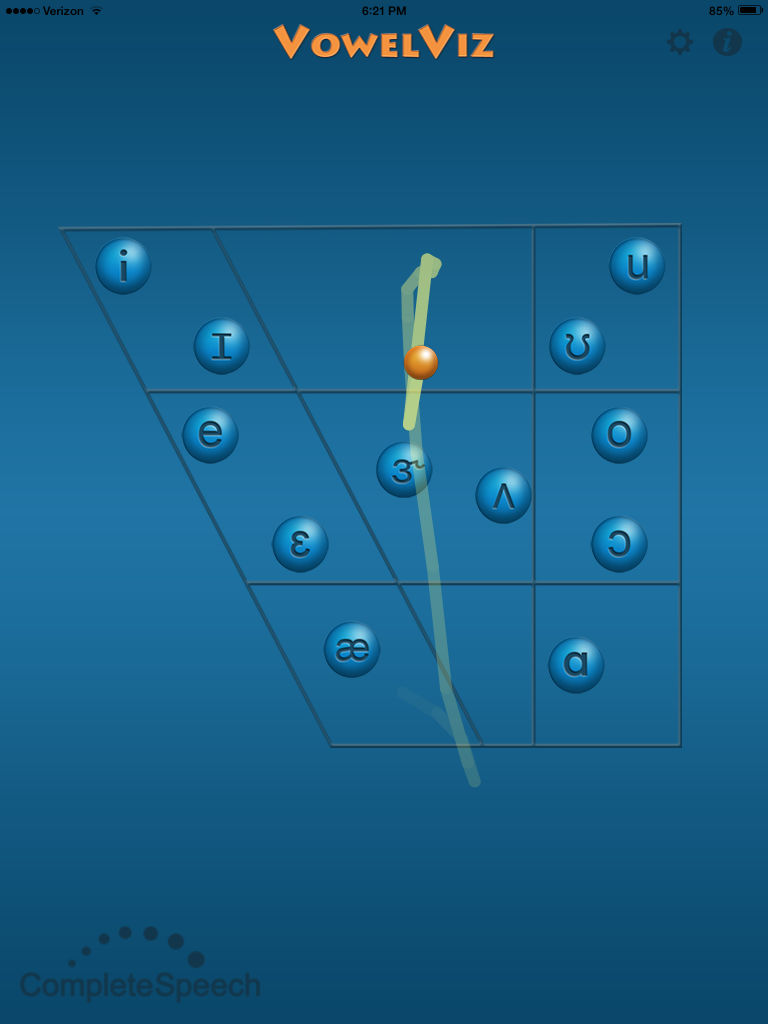 Vowel Viz uses the iPad’s microphone to map the speaker’s vowel productions over a vowel quadralateral. To refresh your memory, the vowel quadralateral is a chart that represents tongue placement in the mouth during vowel productions.  Did you have a grad school flashback too?   As students produce their vowel sounds, an orange ball moves around the screen.  The goal is to have the ball hover over the area that the target vowel is produced. 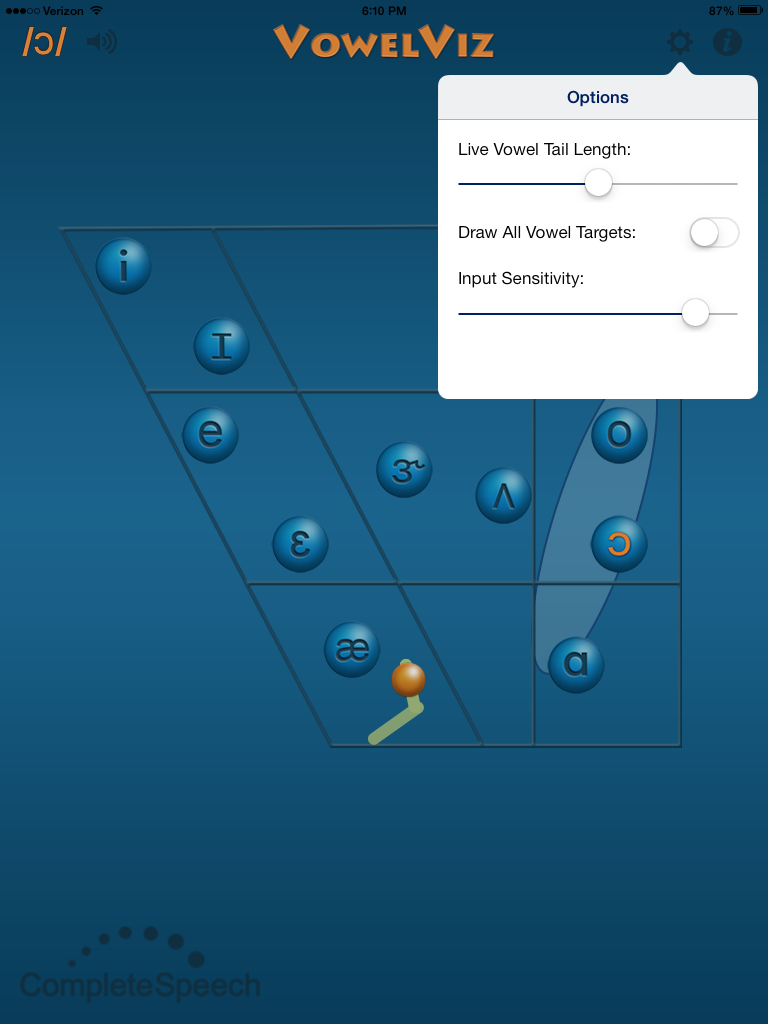 You can select a specific vowel by tapping it.  This will also highlight a target ‘area’ for production.  The production area will be indicated by a blue oval. These areas were researched and considered to be the ‘average range’ for the targeted vowel’s production. I liked how the ranges allowed for most dialectal productions. If your student needs to hear an example of the vowel just tap the speaker symbol in the upper left hand corner.  You can adjust the microphone sensitivity, how long the trail from the orange ball lasts, and the choice to display all of the target vowel areas by tapping the gear symbol on the upper right hand side. 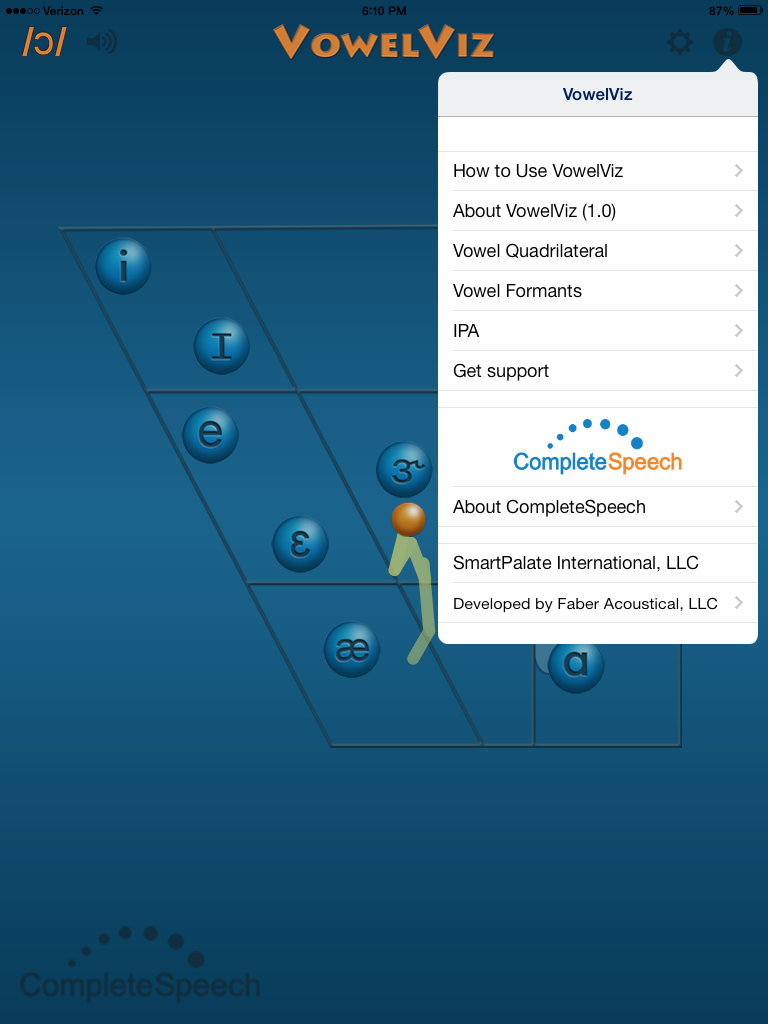 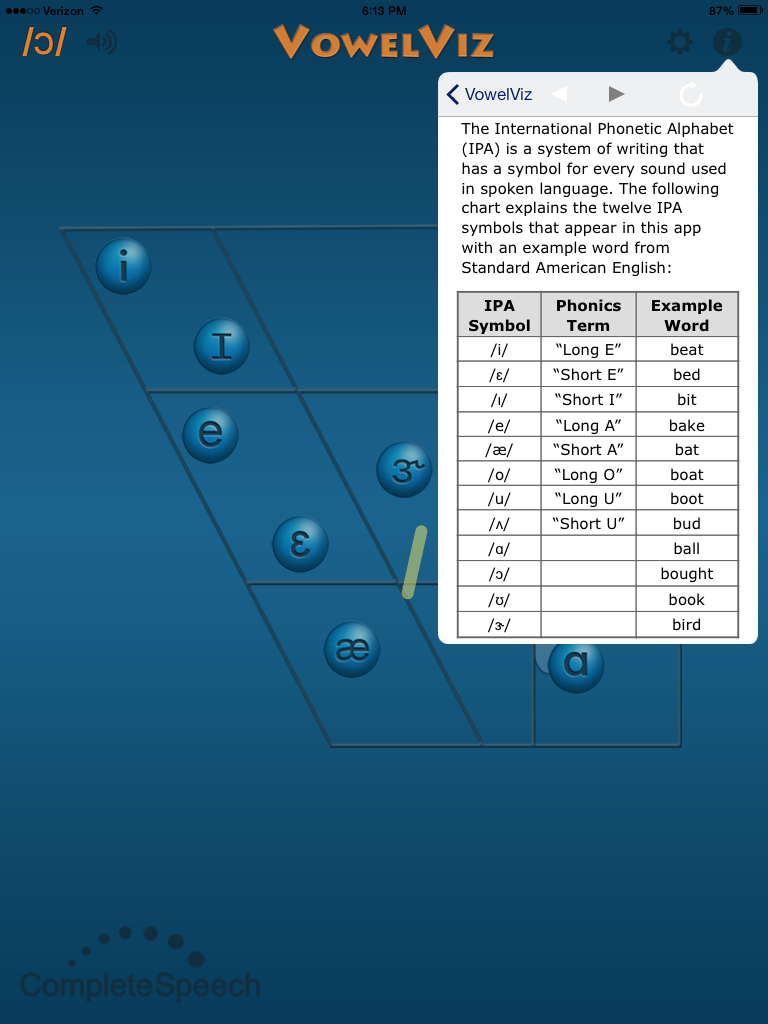 I was very happy to see this IPA chart for the vowels, perfect for a quick refresher.

I have several students who have articulation goals due to various issues.  Truly, I never focused much on vowels, I kind of forgot about them.  It wasn’t until I started playing with Vowel Viz in my speech sessions that I saw the need to work on them and the impact they had.  Even though my students were doing a nice job with their artic goals, I was impressed how much clearer they sounded when we  focused on vowels as well.

Depending on the student, I chose a sound we were working on and had them produce the sound in the initial position followed by a vowel.  Then I would track the vowel accuracy by seeing if the student could get the orange ball into the vowel’s target area.  If we were just working on vowel production, again I would take data on if they could get the orange ball in the target area and then see how long they could keep it in the area. I tracked for 3 sec time spans to start.

My students LOVED using the app. Since we cannot see vowel productions, having the visual feedback was fantastic. My students thought it was so cool to see their sounds!  By being able to see approximately where their  productions were, it allowed me to give them prompts and cues on how to alter their tongue position to produce the correct sound.  Several students wanted to have contests on who could get the closest to the target vowel or who could hold the ball by the vowel the longest. It was great to see them self-motivated!  This app was able to not only provide amazing feedback for both me and my students but is was able to engage and motivate them.  That is a combination you can’t beat!

To add this app to your speech room visit iTunes This $29.99 app is only for the  iPad.

Complete Speech has generously donated an app code for one lucky winner! Enter the raffle below for your chance! A winner will be chosen on Saturday. Good luck!

All Assessments Are NOT Created Equal. For most Speech-Language Pathologists (SLPs), completing an evaluation is a smaller part of the job.bit.ly/3acy5Y4 ... See MoreSee Less

I tend to focus on my kids being able to say /er/ not /r/ when we start. Once they can nail /er/, you can shape the rest from there: Quick Tricks for R:bit.ly/3ovR9ZU ... See MoreSee Less

Happy Thanksgiving!! I am so thankful for our community of passionate, creative, and kind professionals. I wouldn’t want to be anywhere else. ... See MoreSee Less
View on Facebook
· Share

In ADHD for SLPs (Speech-Language Pathologists) Many agree that there is nothing greater about our field than its amazing diversitybit.ly/3Fjb5VR ... See MoreSee Less

We all need some TLC. Try these doable tasks to help yourself relax and regain some sanity. bit.ly/2lxbGxf ... See MoreSee Less