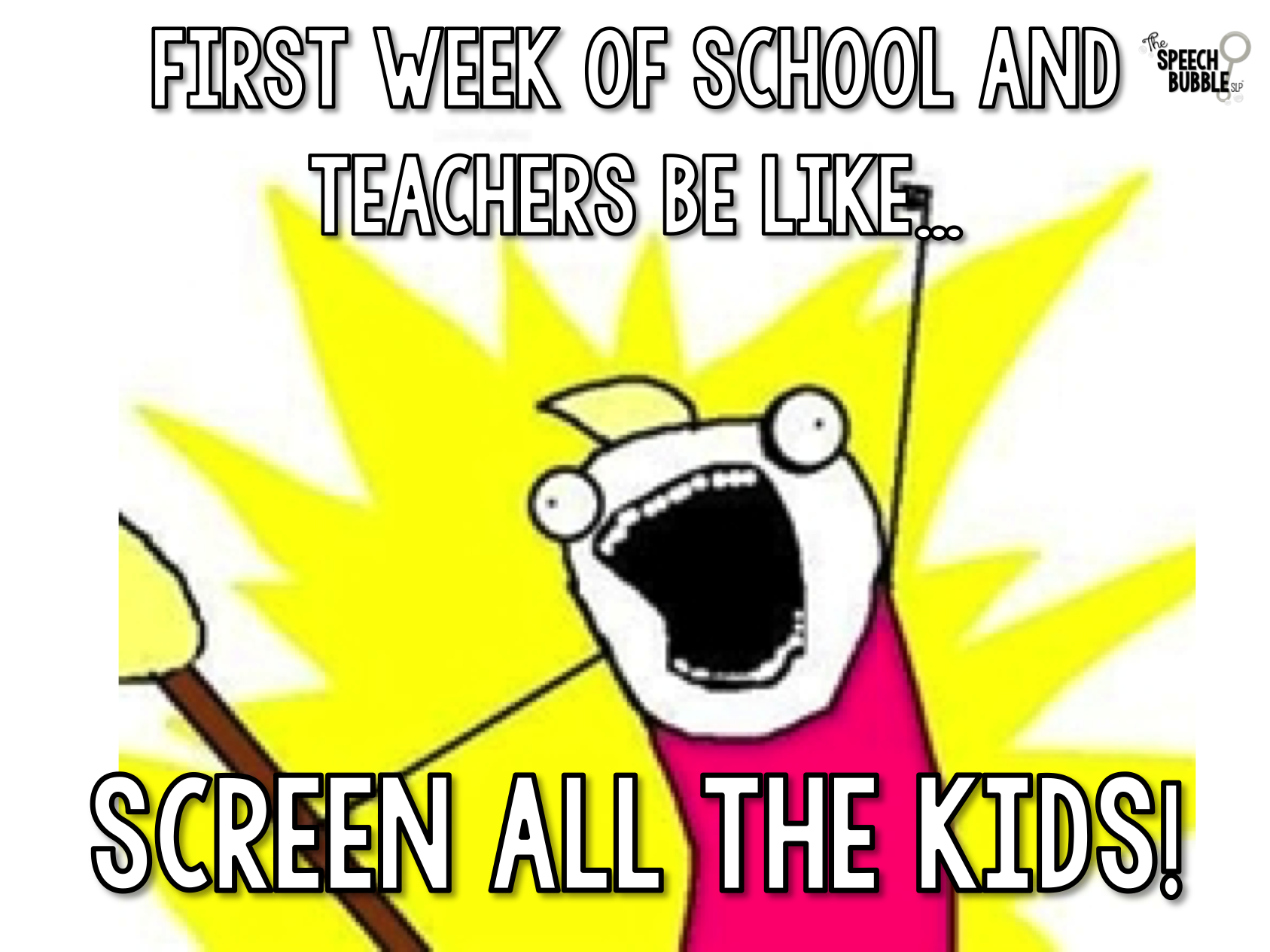 I’ve used some great Common Core based (i.e., using the Common Core standards for a grade level to create the screening) language screenings in the past. Since the majority of the country follows Common Core, that may work just fine. Over the years, though, I realized I needed something different.

When it comes to Language and Speaking & Listening, not all Common Core standards match kids’ developmental language skills, sooooo I decided to take matters in my own hands. I designed my own developmentally based, Common Core referenced language screeners!

Wondering what “developmentally based and Common Core referenced” means? I chose targets for my language screeners based on developmental milestones for language. Then, I went through Common Core to see what standards, if any, these milestone skills could be tied to. 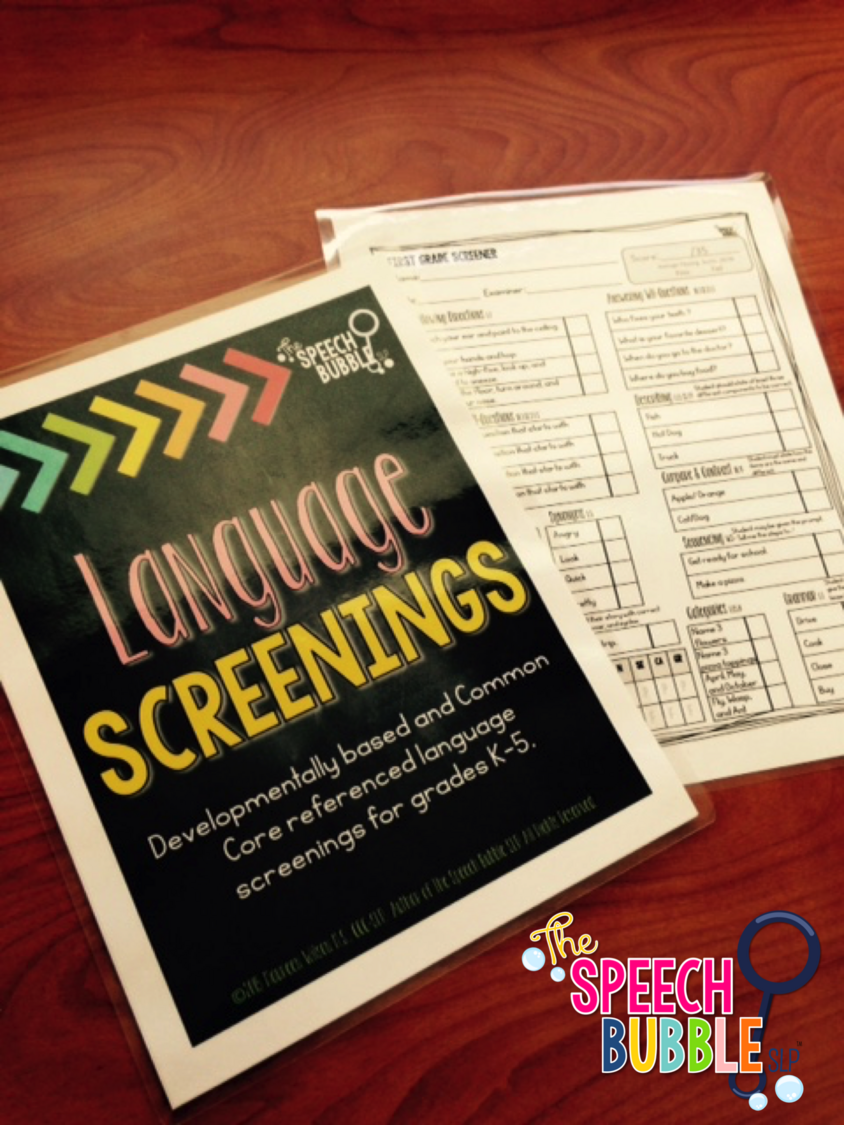 How did I decide on these particular skills?

Pick them out of a hat? Close my eyes and point? While those methods would have been a lot easier, I decided to go with good, old fashioned research. I pulled data from ASHA, milestone studies, and lots of language books. After sifting through tons of information, I chose the skills that seemed to overlap the most across all my sources.

The next thing I wanted was some type of Pass/Fail indicator. I needed a point of reference, so I added a cutoff score based on an 80% average to the top of each page. Some are less than 80%, but that’s due to how the numbers worked on the screeners. 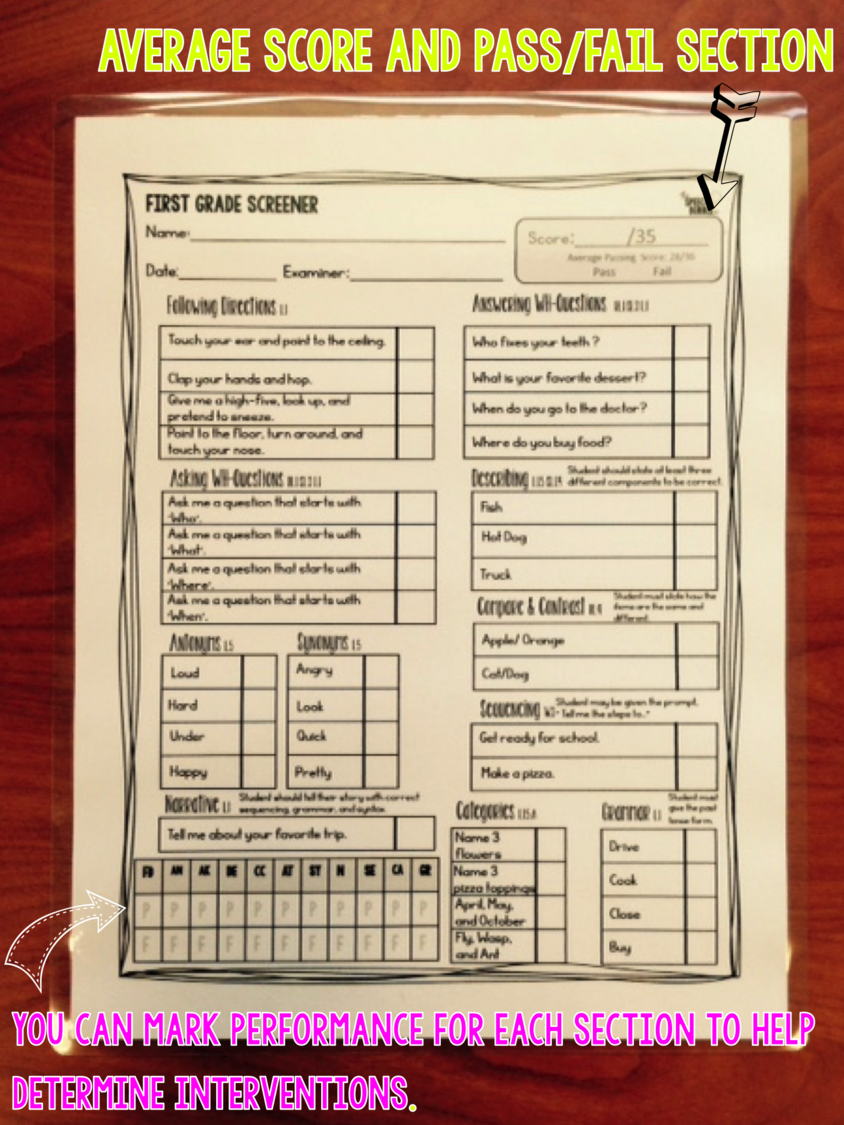 Each question/task is worth one point. You can use a 1 and 0, + and -, whatever you like to do. When you’re finished, count up all your points. Enter them into the total portion at the top of the screener, and you’re finished!

You can also take a closer look at each section of the screener to better identify areas of weakness.  In the bottom left of the screener, you can circle P if the student passed that section or F if they failed it.  This helps establish goals and determine starting points.

These language screenings are available in my TpT Store. If you use them in your classroom, let me know what you think in the comments!

« Fall Books for Speech
Basic Concepts on the Road »

You just set up your job interview...now what? I'm sharing my advice and secrets that I learned from being on both sides of the table. ... See MoreSee Less

So You Have A Job Interview...Now What? - The Speech Bubble

Congratulations! You’ve graduated, or are about to, and you have scheduled a job interview. I remember being excited and nervous when I scheduled my first interview. It was my first real, big gir...
View on Facebook
· Share

Sensory difficulties can make the school day a challenging for our kids. Here are some ways you can make your speech room a sensory safe haven to help your students make the most out of their minutes with you. ... See MoreSee Less

More and more children are being identified with Sensory Processing Disorders (SPD). Years ago children with sensory issues were dismissed as being difficult and defiant. Thankfully, we are now more i...
View on Facebook
· Share

We know verbs are essential in communication but so often we inadvertently end up focusing on nouns.⁣⁣-⁣⁣Lowman et al 2018, stated that lack of knowledge of instructional verbs like: identify, sort, select, etc could have a negative impact on their engagement and learning process 😯⁣⁣-⁣⁣Snape and Krott, 2018 found that⁣⁣🔹kids could learn new verbs from simultaneous examples as long as...⁣⁣🔹the examples were different.⁣⁣-⁣⁣So when you are working on those action words be sure to use lots of different examples for the same verbs 🏃‍♀️⁣⁣-⁣⁣The Hanen Centre has a longer list of early learned verbs if you're interested. The article from Snape and Krott, 2018 is linked my profile 👍⁣⁣-⁣⁣bit.ly/VERBSARTICLE⁣⁣-#thespeechbubbleslp #schoolslp #slife #speechtherapyideas ... See MoreSee Less

Three materials are all you need to write some secret messages in speech. Use it to target vocabulary or articulation. ... See MoreSee Less

Sometimes we need something different to spice our speech sessions. So, when I saw this on Pinterest I had to try it in my speech room! All you need is a white crayon, white paper, watercolors, and br...
View on Facebook
· Share